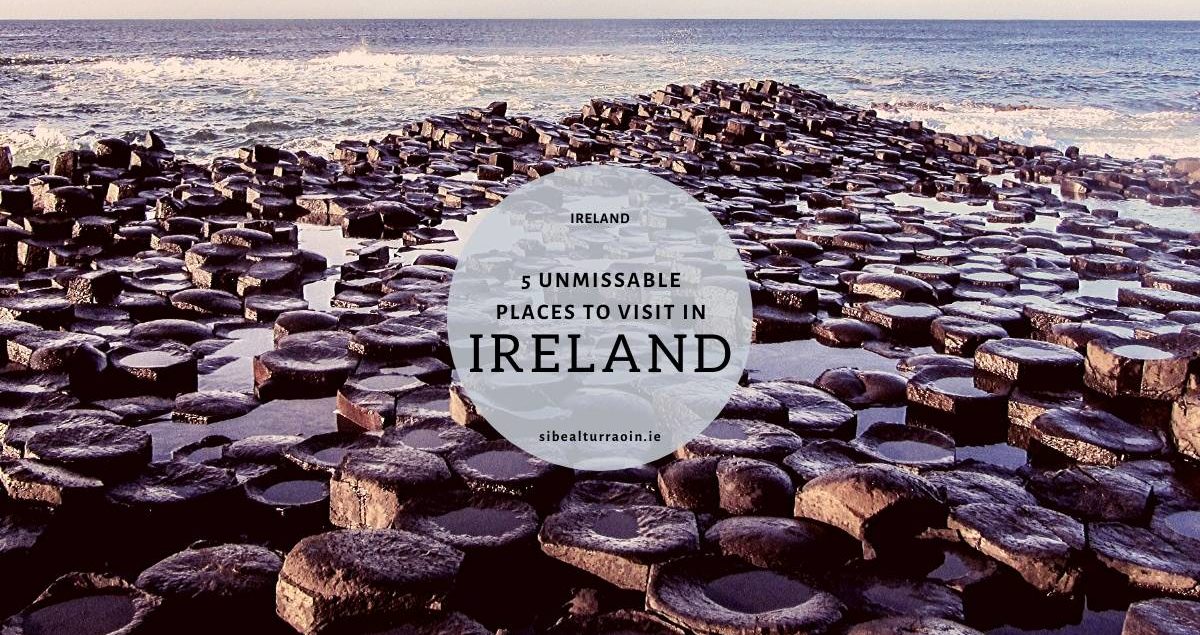 hiking, Ireland, nature, things to do

This is an incredibly hard list to write. I mean incredibly. 5 Unmissable places to visit in Ireland? Only five? So I’m cheating a little and adding some together. Look it’s my list so I can ok? Some of these are pretty touristy but then again there’s a reason for so many people going there.

This is totally cheating but the Blaskets, the Skelligs or the Aran Islands will all blow you away, when you image people have lived on these remote, tough and stunning rocks in the stormy Atlantic for hundreds and hundreds of years.

This 2,500-kilometre trail runs along nine counties, the lush and rugged green Kerry and Cork, the rocky Burren and Cliffs of Moher in Clare, the wild Galway and Mayo, Yeat’s Sligo and the beautiful, majestic Donegal.

An Irish giant named Fionn Mac Cumhail wanted to fight a Scottish giant called Benandonner, and so he built a bridge to Scotland. However, Fionn decided that the Scot was too big to fight and returned home, but not before waking Benandonner. He followed Fionn back to Ireland, where Fionn, with the help of his wife, tricked Benandonner into thinking Fionn was the larger and stronger of the two, and the terrified Scottish giant tore up the bridge running back to Scotland. Well, it’s more interesting than the geological explanation.  In Scotland the same formations are to be found on Staffa, so maybe it is true after all.

Newgrange and the Hill of Tara

Meath is incredibly important in Irish history, the seat of the High Kings of Ireland is found at the Hill of Tara and Newgrange is a burial mound lit into it’s deep interior by the rising sun on the Winter Solstice, a holy and incredibly complex site that is older than the pyramids.

Glendalough and the Wicklow Mountains

If you’re a hiking fan you will love the Wicklow Mountains where there are trails, paths and peaks for every level, film buffs will recognise locations from Vikings, PS I Love You, Braveheart, and many more, and if you just like pretty scenery there’s plenty of that too. A stop on the way back at the teahouse in Avoca for cake is mandatory.

These stones are looking like chocolates. Hats off due to your photography.

Sibealreply
– In reply to: Francesca

I wish I could eat them! Thank you 🙂

Excellent post.The information you provided is usefull to all of us.Thank you for sharing.-Shirdi flight package from chennai.

Great post and advice. Very useful information, it clarified things a lot for us. Thanks for wonderful blog. – seo services in chennai

It’s great spot to find new information. Here we all can learn a lot of useful things. Thanks you so much for this wonderful article. – pay per click in chennai

Wow! these places are truly stunning and beautiful. eager to visit them all. Thanks for sharing this article.
Shirdi tour Packages from Chennai buy Flight – Vasantkamal Tours