A couple of years ago at a craft fair in Dublin, I decided I needed an early Christmas present and bought a Scythian bow from a Hungarian guy. I’d done archery a few times, the first with a longbow in the woods at home in Dungarvan. But this bow was so pretty I just fell in love. I joined Liffey Archers in Dublin, learned a lot, shot a shot, and made a load of friends; but until I met up with two crazy Hungarians at Greenhills in Tallaght the thought of shooting my bow as it was designed for, from horseback, was nothing more than a joke I had in my head. And when, last year, I saw a poster at Bogfimisetrið for a weekend of Horseback archery in Iceland, I knew I had to go. So the last year was spent trying to unlearn all the traditional recurve techniques and the summer I spent learning to ride Icelandic horses, often to the amusement of the horses while I practiced bareback, or without reins, or holding some strange stick that wasn’t a crop. The fantastic Elwira at Núpshestar had me learning something new every time and it turns out I’m a lot better at galloping bareback than I am trotting with a saddle. 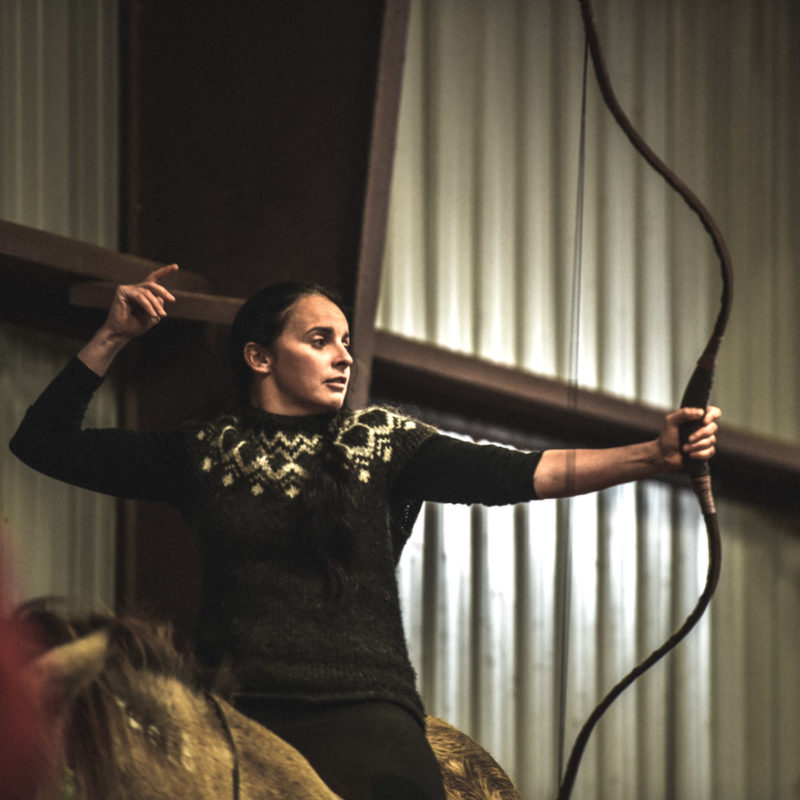 Icelandic horses are bred from horses the Norse brought here 1100 years ago. Desirable traits included the obvious suitability for the harsh climate and terrain, and also some distinctive gaits: the tölt (a running walk) and skeið (flying pace). The tölt involves the legs being lifted very high and is an incredibly smooth gait to ride – you don’t feel it at all. Quite small for horses (on average 13-14 hands which for other breeds is pony-sized), I’ve found Icelandic horses really gentle and they are incredibly intelligent. Though this also means they have definite personalities. And opinions. And plans. Which might not be the same as yours. They are hardy little creatures and can cope with all types of weather, even the winter, and so are quite furry (even their little furry ears!). They start training much later than other breeds and also live much longer, on average to their mid-thirties, but the oldest mare recorded was in Denmark and lived to be fifty-six. 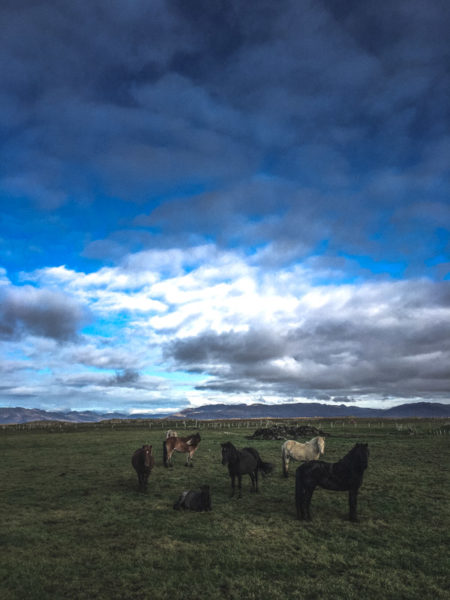 Ok, so I bought my bow because 1) it’s just really pretty. Yes, that’s shallow, but just look at it. It’s badass. And 2) because I didn’t want anything fancy and it’s essentially a  stick and a bit of string. And that’s what I have. Technically a youth’s bow. the draw is maybe 25-28 lb (I never had it measured) but it’s light, I can draw it easily, and in case I didn’t mention it already – it’s beautiful. From the 9th-1st a group of Eurasian nomads called the Scythians used these bows from horseback. The design and composite materials deliver more power than wood alone, so you can have a smaller bow with more power. Otherwise you’d have to have longer and longer bows, hence the longbow.

I use Bearpaw arrows from 3D Archery in Ireland. One thing I discovered in this was that I need more length between the fletches to nock the arrows as I was being shown here. Something a bit like this:

Having said that there are a hundred (well, ok, a few at least) ways to hold the arrows, nock the arrows and draw, whether you’re doing the pinch method, thumb ring etc. Some cultures used quivers, some didn’t, some held the arrows in the bow hand. In the end, I think you have to do what feels right and comfortable for you – this is for fun right?! Though if I have any excuse to buy more arrows… that’s a different story.

A brief history of horseback archery

Horseback archery is almost synonymous with nomad horse cultures and conquering cultures like the Mongols, Huns, Scythians, Persians and so on. Some sources attribute this to the practicalities of having horseback-mounted archery rather than a traveling with a chariot as the Iron Age came into effect around the 9th century BC. Light archers could act as skirmishers and harass the enemy; while heavy archers, like the Byzantines, shot a number of volleys before moving in with blade weapons. Though in some armies such as the English, the term ‘mounted archer’ was one who rode to battle and dismounted for the attack. The problem with a mounted archer though is that the horse is a big target, and foot archers can shoot faster and in greater numbers. Gradually as firearms came into being around the 16th century, archers became redundant. Though they could fire faster than the cumbersome loading of weapons of the time, the effect of gunpowder and musket balls were fare more deadly. In recent years though horseback or mounted archery is undergoing a huge revival.

Learning to shoot arrows from horseback

Ok, so I could shoot. I could ride. Could I do both together?

Obviously if attempting this you need to familiarise your horse with the equipment and the new noises it makes. Or you will end up on the ground in short order. My horse could have had a bomb set off under him and wouldn’t have batted an eyelid. He was bored. The idea was to be shooting from tölt or gallop at the end but I had a hard time getting him to speed up while I was busy swearing at my attempts to nock. My lovely partner, an experienced horsewoman, had more success though in getting him to pick it up a bit.

So holding the arrows in the bow hand, nocking it while not looking (hence the swearing – this selection of images have been heavily edited) was most definitely the hardest part. And I need to practice. A lot. While jogging or something to mimic being on horseback. Also getting frustrated with nocking made me give myself a few idiot marks a couple of times, which is what happens when you have a high pain threshold but bruise like a peach. On the plus side, my Halloween costume is going to be very realistic this year. 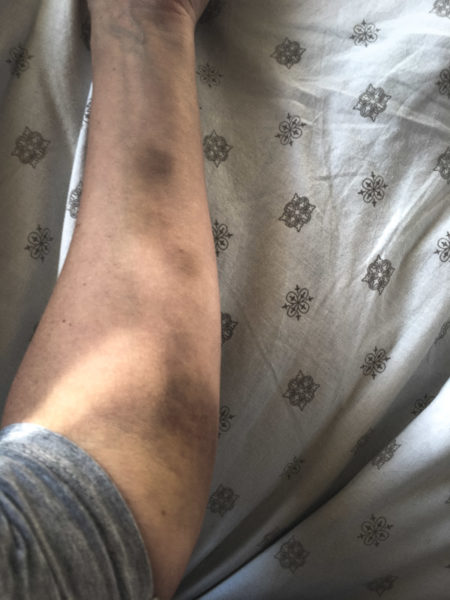 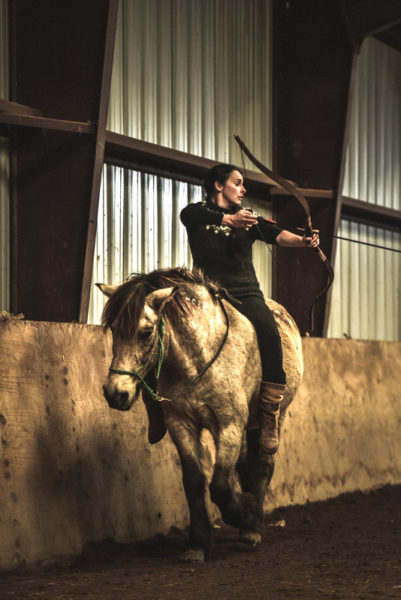 At one point a year ago I was telling my friend I was getting frustrated with my shooting, trying to unlearn all I had and just shoot instinctively, and he told me I was overthinking it. That once on horseback I’d forget all that. And it was true! Aiming by not aiming, focusing only on the target, forgetting about anchor points was easily the easiest part of all this. Instead of an open-release I kept doing my ‘traditional one’ – some weird-ass floppy hand thing I do. But hey, it wasn’t interfering with it too much so who cares?

Unfortunately shooting outdoors requires special permission in Iceland, and especially from horseback. (One of the things I find most bizarre in this country is the love of bureaucracy and rules, considering it was populated by adventurers, people trying to get away from that, oh – and also those who were outlawed, presumably for lack of respect for rules.) So I guess it’ll be a while before I get to go again.

Aside from learning new skills though, and feeling just a little bit of pride at being able to actually shoot arrows from a moving horse like a badass Mongol warrior (baby – let’s face it, it was my first time!). I met a great group of people, and that made the whole thing worthwhile and fun! The best lesson I learned at Liffey and Greenhills was to enjoy myself. It doesn’t matter if one arrow or a hundred hits the target, if you’re not having a good time with a good group of people – it doesn’t matter a damn. Speaking of – as I couldn’t selfie stick, ride and shoot at the same time, all photos of me on a horse are thanks to the fabulously talented Matilde Brandt from Norway. Photographer and horse clothing designer extraordinaire you can check out her work and her horse Batman on her website and Instagram. 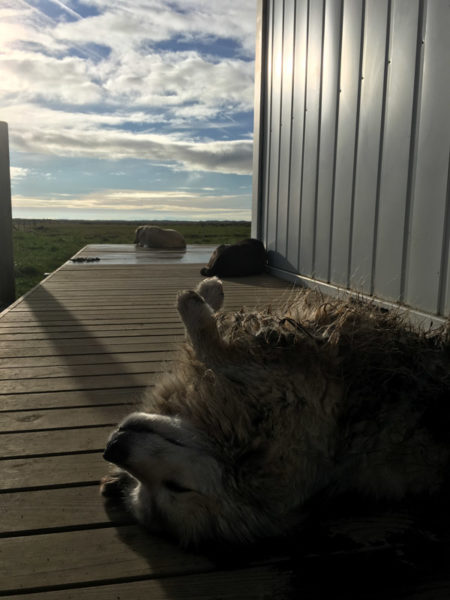 (Gratuitous shot of the fluffiest dog in the world sleeping upside-down, not at all related to archery but good for the soul.)

[More images in the gallery at the top of the page.]