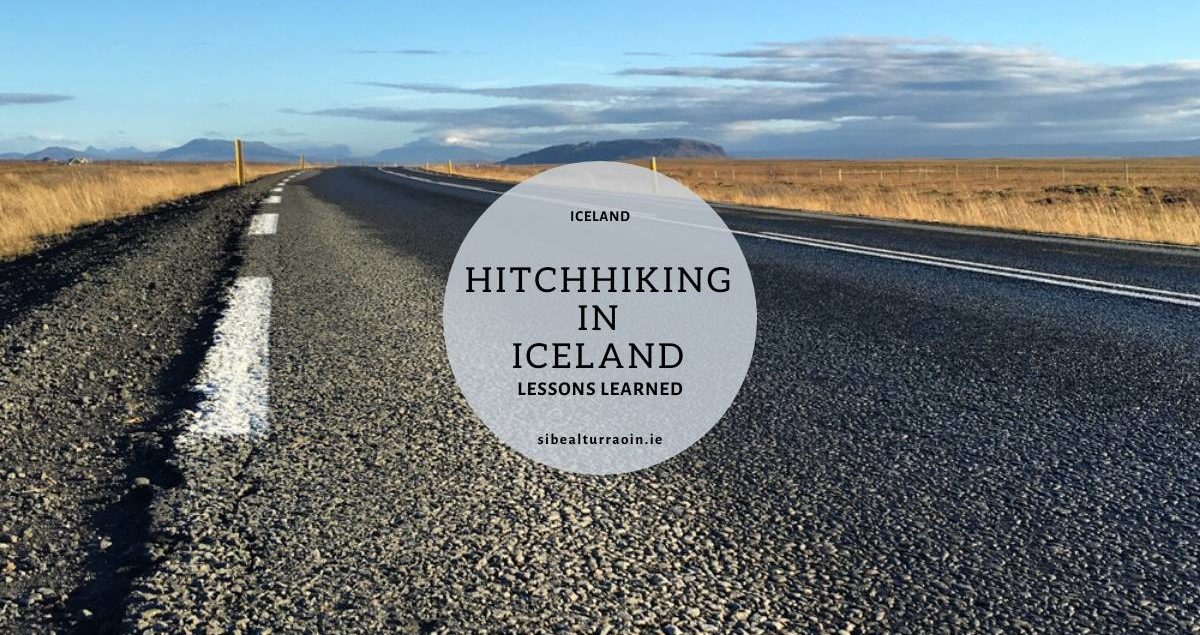 Right now I’m based north of Selfoss and find myself (for the first time since I was old enough to drive) car-less while living in the countryside. At this point I’m getting cabin fever and I’m learning a lot about Hitchhiking in Iceland. On my Sunday off a couple of weeks ago, I really wanted to go to Gullfoss, only about an hour north and so I packed my bag with my camera gear, positioned myself on a bit of road where it would be easy for cars to pull in and stop, stuck out my thumb and waited. And waited. And waited. And the cars sped by, until I gave up hitchhiking north, walked to the garage on the other side and a woman asked if I wanted a lift and so I went to Selfoss to eat brie and drink beer instead. There was lots of traffic, all going in the same direction, so what went wrong?

It was a Sunday.

The last time I gave up on trying to get a lift here was also a Sunday when a million cars passed me by and I walked an extra 15km until a Dane took pity on me. Though there were a lot of tourists on the road, I think some believe you should have hired a car, some genuinely have a lot of luggage, some want to pay back karma when they were hitching (love these people) and for locals… during the week just seems to be better for some reason – Sunday spinners maybe?

I spent quite a bit of time hitchhiking in Iceland during the summer. It’s not like Iceland doesn’t have buses. It does and the route is extensive. Even places where you don’t think buses could go they do. But sometimes you miss the bus, or the time doesn’t suit or whatever your legs are going to fall off and you need to hitchhike. Or maybe for a lot of people, it’s one of the ways to keep the costs down, along with wild camping (check the regulations!) and shopping in Bonus.

Disclaimer: I, in no way, take responsibility for anything that happens you while hitchhiking. I’d you don’t feel safe, don’t. We’re all responsible for our own actions.

Anyway. Here are some lessons I’ve learned on hitchhiking around the world.

Stay safe while hitchhiking in Iceland and everywhere else

I only had one slightly dodgy lift in Iceland. Well not dodgy but just I felt uncomfortable. I text my friend the number plate, told her I’d check in every 15 mins, got out as soon as I could and got another lift. Probably it would have been fine but.. it’s better to be safe.

Countries to hitchhike in

I’ve hitched in Latvia in tractors, Cuba in Ladas, Western Sahara in regular cars (that time I was locked in for my own safety when we ran out of petrol), Scottish Power vans in Scotland, Ireland in just about everything, Iceland in gravel lorries.. some countries are safer than others. Hitchhiking in Iceland is probably the safest I’ve experienced. If you feel uncomfortable don’t, but use your common sense and don’t get into a situation you can’t get out of. And Americans, “I need a ride” means something totally different in Ireland.

It’s a lot easier to get a lift in the middle of nowhere than in a city. I spent almost an hour waiting in Akureyri once, though then again another time it was only 5mins. Which is why a few weeks ago, after forgetting my wallet, I ended up borrowing money to get an intercity bus rather than try and hitch out of Reykjavik at 10pm on a Friday night as even my Icelandic couldn’t figure out the best place to try and get a lift at that time of night in a city. It was a lot easier to hitch out of Selfoss then to my final destination, even though it was midnight.

It can get very cold on the side of the road. Once in a downpour in Seydisfjörder even looking like a drowned rat didn’t elicit sympathy from the millions of cars coming off the ferry. Or maybe they didn’t want me to ruin the car. Who knows.

It’s not a free taxi, don’t treat it like one. I’ve never paid for fuel but I do offer food if I have it. Chat, or don’t if the driver doesn’t want to. But more importantly, listen. You’re a guest, be respectful. And on the subject don’t steal someone’s pitch. That’s just mean. Though when I moved up the road so I wouldn’t take a guy’s spot he got me a lift too when a car stopped so if you’re nice karma will look after you.

I’m female, small and don’t have a lot of luggage. It helps. I’m usually not waiting long.

If that’s not you… not sure what you can do about the first two but definitely individuals without a lot of luggage do better. A big backpack can be the size of another person. It’s much easier to get a lift if you’re on your own.

People are genuinely really nice. And probably are not trying to kill you as often as you might think.

I’ve ended up on pub crawls, got driven way out of the driver’s way, made friends, learned about the culture, language, last Sunday I got a history lesson on Selfoss from a neighbour, I’ve shared food, gotten lost, changed tires, laughed, talked and listened. It’s a great way to meet people, especially if you are travelling alone.

Though having said that I am so happy to finally get my own car, a 4×4 jeep, which will be great for off-road and winter driving. Assuming I can find it in the snow when I get back to it because it’s white. In fact I was able to pay into the karma pot yesterday when I picked up a half-frozen Belgian down near Skógar.

Check out these interesting Icelandic hitchhiking stories from Nomadic Matt, Michiel and Mike (I’m going with a M theme..)

Do you have any interesting, traumatic or just funny hitchhiking stories? I’d love to hear them!