“No, it used to be the highest, then they found another one.”

“I refuse to believe you! Prove it!”

So went the argument as we enjoyed a break from the most un-Icelandic heat of a summer’s day, sitting in front of Glymur, the second-highest waterfall in Iceland. (The highest is now Morsárjökull if you’re a waterfall nerd.) Regardless, Glymur is pretty awe-inspiring, even if it turns your legs to jelly looking down the almost 200m drop.

Glymur is easy enough to find, just take a detour into Hvalfjörður via Route 47 and way in at the end you’ll see signposts and a (toiletless) car park. A rough path leads into the valley, until you reach a cave. Here you have a choice to turn left up the near slope on the northern side where you can’t see the waterfall. Or turn right, through the cave, down to the river where you cross via a log (only in the summer) and then up some scrambly steep inclines. As far as difficulty goes I was dying in the heat and out of hill practice. It’s anything from 30mins to an hour up depending on how you go. It’s slippery in places so it’s a good idea to have poles. And definitely a more specialised hike with crampons and all the gear in winter. Nevertheless, the views are spectacular and crossing the river right at the top (this time a wading job) was heavenly as the ice-cold water cooled my feet. This crossing is reasonably shallow, mid-calf depth but alternating between stony and slippery so go slowly. Its also a good idea to walk a bit upriver to the wider and slower waters, rather than close to the falls edge, where we saw some crossing before I decided I didn’t want to see human pancakes in the making. Coming down you can take a slightly shorter and less steep path (signposted) which is unremarkable but easy-going and leaves you much closed to the car park. 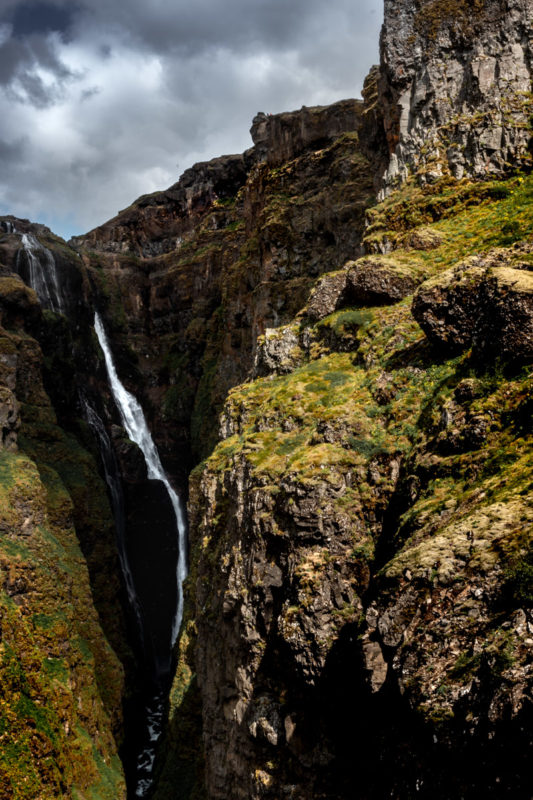 Thank you for the article! I’ve added this to my list for the next trip.

As an aside, should it be Mosárfoss?

Sibealreply
– In reply to: Josh

Thanks so much Josh! Hope you have a great time!
Well jökull is the glacier, foss is a waterfall – and in this case Mosárfoss is part of Mosárjökull.