I started off early on a warm and un-Arctic Sunday to do another part of the ‘Myvatn Trail‘. Going from Reykjalíð the beginning was thick with vegetation and swarms of flies and mosquitos. My preferred methods of coping with the little bastards is industrial strength Deet, smoking copiously and using my plaits like cow tail swatters. And they are everywhere. With a perverse desire to fly up your nostrils. No wonder birds come here to get fat during the summer. Unfortunately for someone who wanted to be an ornithologist when they were five years old, my ability to name them is at zero. So I know I saw big ones, little ones, brown ones, white one, black and white ones, noisy ones and the one I was almost able to pick up.

After Hlíðartfjall there’s a huge lava field with a wee oasis of green at Sáta until Leirhnjúkur. I had to stop and check my bearings a few time because although I could see my destination the lava fields are tough going and more so cross country. The nicest part of the 20km trail is just by Leirhnjúkur. I am constantly amazed by the juxtaposition of landscapes here. You can have grey moon-like deserts just next to lush green grassy hills, with touches of red in craters, yellow sulphur fields and milky blue geothermal pools. In this area the Mývatn fires, 1724–1729, occurred where fissures spilled lava down to three farms but fortunately without fatalities. I’d been to Víti, a crater with a pool at the bottom, the last time here in 2008 and they were doing a lot with the power plant and the Iceland Deep Drilling Project, looking for more powerful geothermal resources.

After reaching Krafla, which has erupted almost 30 times in recorded history, I realised I had just missed the bus back to town. For the next 8km down to the main road, NO ONE stopped. I get the if you’ve hired a car, at great expense, you don’t necessarily want to be a free bus for people but I was in the middle of nowhere! You all had loads of space! And another 15km would have been just a little too much I think. That was definitely the longest before I got a lift. So thank you nice Danish man. And your son has excellent taste in comics (Huey, Duey and Louie). All told it was about 30km and all I’m fit for is reading Jo Nesbo thrillers by the sunny (and kamikaze mosquito-infested) lake while listening to the birds. 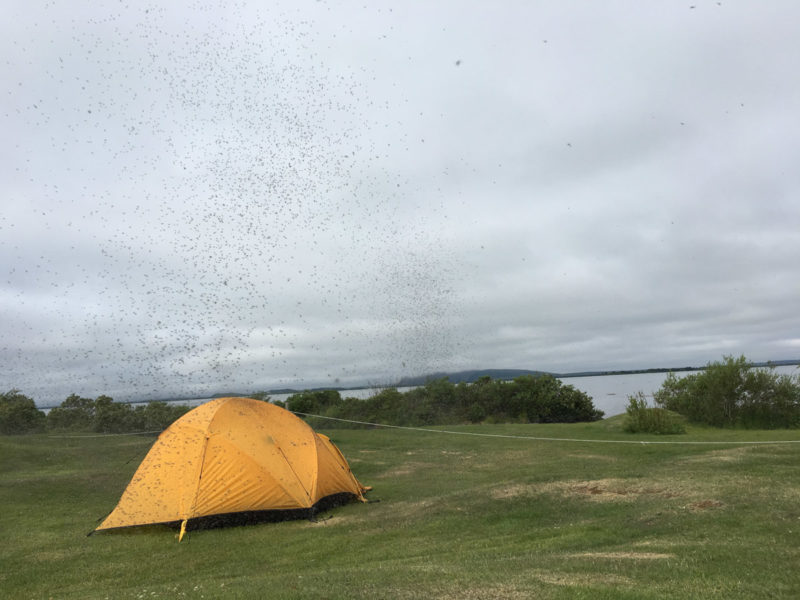 Did you ever get woken up by the buzzing of mosquitos? I mean that it was so loud that you woke up, looked out and saw swarms of insects that made you think of UNICEF ads?

The orange tent next to me was grey, drowned in the little buggers. That was this morning. I had to swallow my pride and don the ridiculous headnet that I was almost going to ditch just so I could pack up my gear. I got insect repellent all over the tent the first evening so the inside was like flypaper, millions of squirming little corpses. That I keep knocking my head off. Plus all the ones I squished in this morning packing up.

I can’t stomach the pea protein anymore. It’s going to have to go. It’s not it, it’s definitely me. But, the Icelandic extra protein yogurt Skyr.is that they promote everywhere is actually delicious. And no I’m not getting paid to say that. So healthy eating is not out the window. Unless you count the hot dogs. Which I’m being remarkably restrained about. Even though my walking guide said there was a hot dog stand at the car park at the end of yesterday’s walk and there wasn’t. I held in the tears.

Goðafoss, the waterfall of the gods

I managed to catch the local bus to Fossholl. Busses go everywhere but there are a few companies and they may only go once a day or on certain days. Though it’s amazing how you can get a bus to what looks in a picture to be total wilderness. I asked the campsite owner last night and the owner told me in a sorrowful voice “they are bad people, they tell us nothing”. Before I arrived at Goðafoss I was half thinking of heading on east that evening. After all I had been here before. But in the golden light Goðafoss, the Waterfall of the Gods, was perfect and I pitched up at the campsite at Fossholl. It’s about the same for most campsites, this includes hot water too. There’s also sleeping bag accommodation, a bed but you provide the linen basically. The showers were cleaned just after I arrived, just as well as it looked like someone had showered in their boots. But the site is nice and very quiet. So far anyway. I had a slight whoopsy when a gust knocked over my tripod and it hit the ground filter holder first. So currently my ND filter is held on with sellotape swiped from the local gift shop. I’ve also ripped a pair of trousers, and bent a tent peg. Oh well.

They do kayaking here at Goðafoss too for the mentally unstable and adrenaline junkies. One took a long time to reappear after heading over the falls. Icelandic horses galloped over the bridge like something from a dream, but unfortunately there’s no riding around here. One of the great things in Iceland is that there aren’t huge visitor centres and railings. Just bits of rope where necessary. And assume that most people have common sense. Which they don’t and you see people doing crazy things for photos which is becoming a real problem. When Þorgeir, the law speaker, returned from the Alþing in 1000AD where he declared Iceland to be a Christian nation, he threw his family god carvings into the waterfall, symbolising the end of the pagan era. But if there was an Asgard, it could do worse that be like this place. Maybe minus the tourists. And yes I know I’m guilty. Dettifoss is certainly bigger but Goðafoss is just gorgeous. I spent all day taking photographs, and just sitting and looking at the beauty of the falls. Maybe that is something we should do more of, instead of hopping off the bus, taking a few snaps, and heading away again, why not, if you have this time, just look and appreciate the beauty of the place. In the low golden light (sunset is 23:30 apparently), under a wide blue sky, the milky blue water thunders past glistening rocks. Almost everyone has gone. Life is pretty sweet.

They are so beautiful- and everywhere!

[…] and they are as good if not better than the so called must see’s (even though I do love Goðafoss and always will). The streams were pretty high as it was late in the day (and had been fed by […]