With the mountain roads finally open I’ve been dying to head off on a road trip to the Icelandic Highlands. Currently, my tent is aboard a boat that is somewhere between the Faroe Islands and Iceland, so rather than sleeping in my car (not really to be advised) my tent-rich friend Ásta decided to join me in a loop over the highlands and west Iceland the other week. The weather wasn’t looking great (windy Iceland-style is a lot windier than you might be used to) so rather than starting off by heading up Route 35 we headed up Route 550 to Húsafell for the first night. It’s not a bad gravel road as they go but the wind is fierce and I thought it would rip the doors off when we stopped to take pictures. As Ásta’s more robust jeep was already packed up I left mine at home and we pitched up camp sometime after midnight, easily done when it’s 24 hours of daylight. This is way fancier camping than I’ve done previously with a huge roomy tent and chairs, not to mention a proper inflatable mattress and (joy of joys) a heater. If I had to pick just one thing I’m heater converted, so long as I don’t have to carry it on my back. Húsafell is a really nice, sheltered campsite and quite close to Barnafossar and Hraunfossar where we made our first stop the next morning.

Barnafossar is the children’s waterfall and while it’s a nice name it has a more sinister origin. The parents from a nearby farm went to church one day, telling their sons to stay at home. However, the boys got bored and left the farm, as they were crossing the natural stone arch bridge over the falls they got dizzy, fell and drowned. The mother, in her grief, cursed the waterfall so that no one could cross it without also falling in and drowning but sometime after that an earthquake destroyed the bridge. In some versions of the story, the mother had the bridge destroyed herself. Baby waterfalls is a better name for Hraunfossar, which looks like little waterfalls that hope to be Dettifoss someday! With the sunlight catching all the little rivulets it’s one of Iceland’s nicest falls and one I’ve been wanting to see for a long time.

If you like your caves there’s a couple of options here if you head on the backroads before joining Route 1 again. Into the Glacier offer tours to the man-made ice caves in Langjökull and you can get guided tours of Víðgelmir with The Cave. Being budget conscious and as I’d been to The Lava Tunnel not so long ago, we instead went to Surtshellir. Legend has it that it was created by a black fire giant called Surtr, who will one day engulf the world in flame with his sword. Said to be haunted, it was a hideout for outlaws in the 10th century and the remains of sheep they stole from the neighbouring farms have been found there. Be warned this cave is as natural as they come, there are no platforms, it’s pitch dark and there are patches of ice. 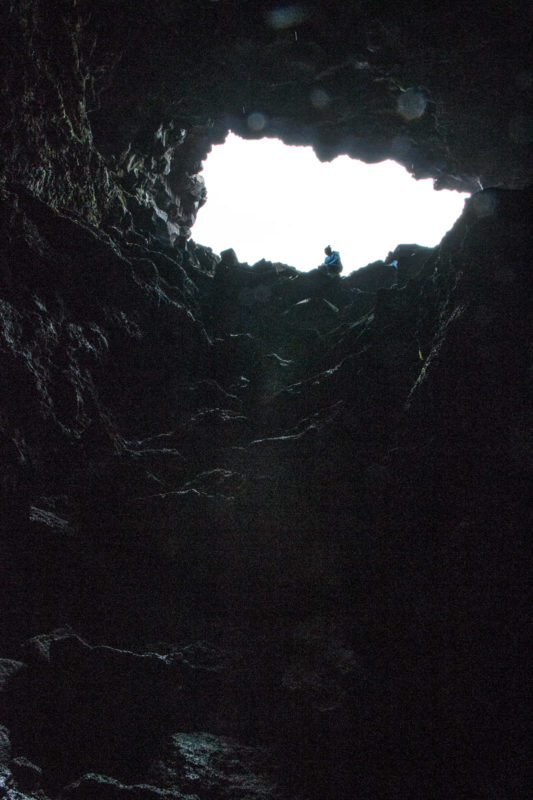 After the spooky cave, something different was in order. I may have been slightly scary in my excitement of visiting Háafell, a goat farm that lets you play with the baby goats, but that’s definitely understandable when you get to play with baby goats right? At Háafell they keep a breed of goats which at one point were almost extinct and are thought to be the original breed brought by the first Norse settlers, or at least very close to them. I’m not sure why keeping goats wasn’t more popular, they will eat anything (including our clothes as we found out) but maybe sheep won out due to their wool. They also have a celebrity goat, who appeared in Game of Thrones in a scene with a dragon. As you can imagine it didn’t end well. The mother names all the goats, and as the son explained he has to remember them all. They also sell delicious cheeses and sausage. Presumably made from the goats who weren’t faster than the dragon. 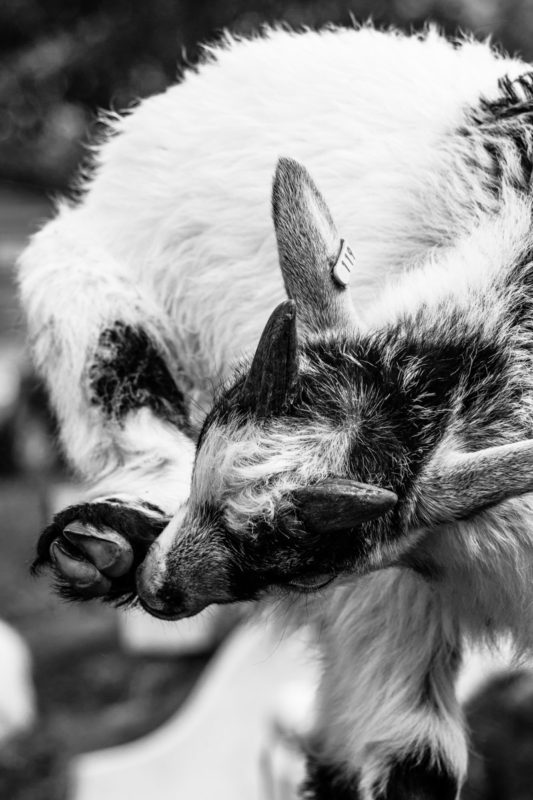 As we were on a waterfall roll at this point we stopped off at Glanni, said to be the dwelling place of elves and trolls. They must have been at work for we saw none but this is a really beautiful place and if you time it right between the buses you can have it all to yourself.

The next night we spent at Varmahlíð and felt very happy that we managed to time getting the tent up, right between showers and so relaxed with our vodka camping cocoa (see this is super fancy camping). This campsite also has a bouncy thingy (it’s not a castle so maybe a big bouncy mattress might be a better description) that I insisted on having a go of before we left. We also stopped off at the local pool which is lovely. Even if the slide isn’t quite powerful enough for adult weight. A top tip from the attendant is to use two pool noodles – one for behind your neck and one under your ankles or knees, so you can float away oblivious to the world. And to the American tourists who were speaking loudly and rudely about us perhaps using the hot pot. Dear English speaking tourists, just because someone is speaking another language doesn’t mean they don’t understand English. Be nice.

So way later than we plan but much more relaxed we headed off on the mountain road. I feel bad that Ásta did most of the driving but maybe she didn’t want to hear more of my swearing when I went looking for gear sticks that didn’t exist. The thing about gravel roads and mountain roads is that the quality is totally variable. Some parts are just fine, some are packed earth and if it’s dry quite dusty but ok. Some have a lot of loose gravel and can send you flying. Some are full of rocks and holes and some are like quarries crossed with rivers. The thing is the map doesn’t help you so check on Road.is too and remember F roads are only suitable for proper mountain vehicles. While we did see a little Kia at one point if you get in any trouble you will not be covered by insurance and that could be the least of your worries. We had a sturdy jeep and we were going 20km/hr for some of it.

The highlands of Iceland are beautiful, in a bleak and desolate way. Huge deserts of volcanic sand and dust where almost nothing can grow and usually nothing that can tell you how windy it can be up here. Yet the landscape is amazingly colourful and also varied, glaciers meet geothermal areas, lush green oases are found in arid deserts and moonscapes.

Our last night was spent at Hveravellir, a campsite by a hot spring just off the worst part of Route 35. It’s a pretty windy spot and I’m glad we changed our plans and started at the other end. The Kjalvegur route which we travelled has been used since about 900 AD and the earliest written descriptions of the area date to 1752, when the Eggert Ólafsson and Bjarni Pálsson wrote about the hot springs here, calling one Öskurhóll or the Roaring Mound because of the sounds coming from it, whistling and roaring. We couldn’t say it really whistles like a boiling kettle but I suppose things change.

We got the tent up straightaway as heavy rain was forecast and I dragged Ásta off on a photo-taking walk in the rain. The hardy alpine flowers are lovely and the contrast of the pinks and golds with the heavy skies were particularly photogenic as we walked along until suddenly I saw Ásta disappearing into the ground. Not in quicksand, but she had found an outlaw’s cave, Fjalla-Eyvindur, or Eyvindur of the Mountains to be exact. A 18th century Robin Hood from south Iceland, Eyvindur was cursed by a vagrant woman after he stole cheese from her. He would never stop stealing, but he would never be caught. He eventually ended up on a farm in the Westfjords, where he met and married a widow called Halla. I’m not sure why they were outlawed, some sources say Halla drowned a child and the couple were outlawed for twenty years. Or maybe he was outlawed and she followed him. Supposedly she would get caught whenever she was pregnant as she returned to the lowlands but she always returned to Eyvindur. In some versions she killed all but one of the children as Eyvindur had no interest in them. In any case she must have really loved him to stay up there. It’s a good three-day walk to the nearest farm (if it existed back then), to steal a sheep. Life was really tough.

While we waited out the rain Ásta told me ghost stories, it was a spooky cave after all, including this one about Djákninn á Myrká, or The Deacon of the Dark River. A man who fell off his horse and drowned in a river on his way to visit his girlfriend, Guðrún. Having not yet heard the news a week later, Guðrún saw her boyfriend, the deacon; deeply muffled in a hat and scarf; who arrived at her farm and then carried her away on his horse. Just by a river his horse tripped and the fall dislodged his head coverings, illuminating brightly in the moonlight his terrible head wounds from his fall.

“The moon fades, death rides.
Don’t you see a white spot
on the back of my head,
Garún, Garún?”

“Wait here, Garún, Garún,
while I move Faxi, Faxi (the horse)
over the fence, fence”.

He tried to drag her into an empty grave in a nearby churchyard but luckily her coat was only half on and she slipped from his grasp as he fell in and the grave filled in from all sides. Because Guðrún is made up of Guð, meaning God, the ghost could not say it, and Guðrún realised she had met the ghost of her lover, and that he was dead. Completely incidentally – and I think what made my friend think of it Garún is also the name of a really nice porter that I had been drinking the previous week.

After warming up a bit (oh heater how I love thee), we got changed and headed up to the hot springs, where a damn in the 1950’s created a beautiful hot pool. You adjust the water temperature with some pipes which divert water from the cold river but be careful of the hot pipe as it gushes boiling water every so often. There’s no fancy changing area so when we went back the second time, after the large group of trekking tourists had gone to bed I just ran up in wet and cold togs which was just delightful. But the pool certainly made up for it. It also gets cleaned properly every day so you don’t have to worry about the human soup. Listening to the rain crashing down while tucked up in our warm, fancy tent that night after a few beers, we certainly slept well before heading back to the lowlands the next morning.