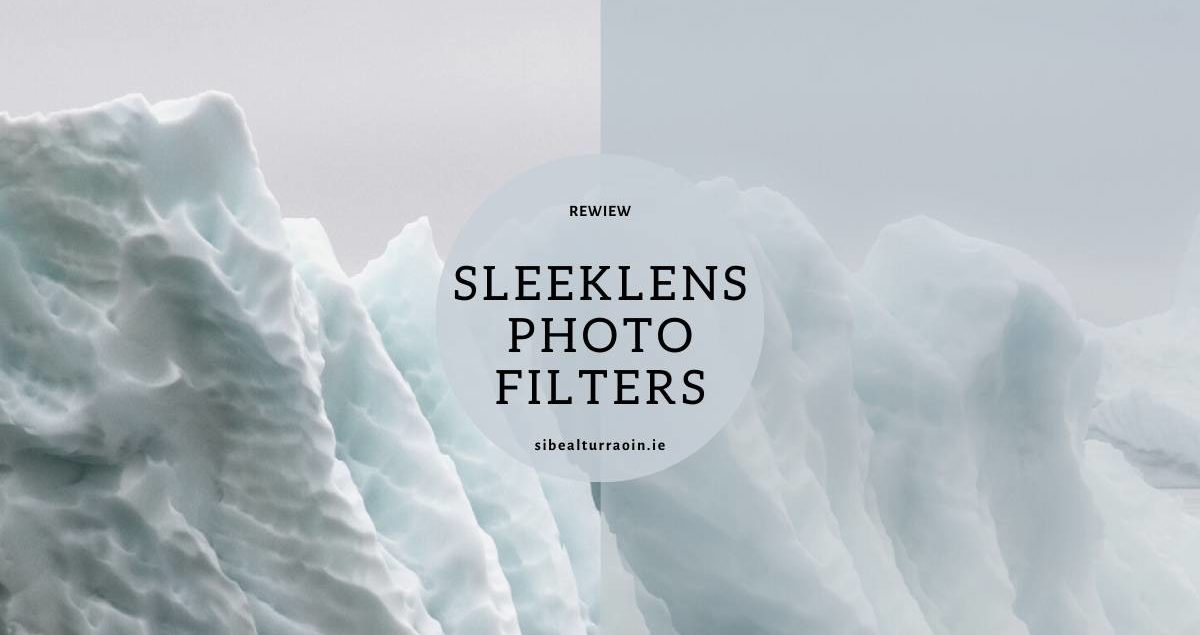 What about processing? Do you use presets? What’s the best Adobe Lightroom Preset? I’m a bit of an old fogey when it comes to my photographic workflow. Maybe it’s because when I was in college we processed and printed our own photos in the darkroom but my style is to replicate what I saw, rather than add a lot of effects. I also prefer to control the adjustments rather than apply blanket ones. For those reasons I tend to stick to adjusting the colour balance, shadows/highlights and removing dust (or most often in Iceland: rain drops!) so I don’t use a lot of Adobe Lightroom Presets. However, I’m always open to trying something new and when Sleeklens approached me to review their Through The Woods presets I curious to see if I could come up with better results rather than my manual approach, plus presets do save you a lot of time.

Disclaimer: Sleeklens did not pay me to review their product – I received the presets for free in order to use them in exchange for an “honest review”. You can read more about my policies here.

Whether for Adobe Photoshop or Adobe Lightroom (which is what I usually use) presets are a range of pre-set adjustments (whether to tonal ranges, the colour balance, saturation etc) which you can apply quickly to one or a number of images – replicating the same adjustments each time though the results depend on the original photograph. In layman’s terms they are filters, and can be used to great effect or badly, depending on the filter or the person using them! A lot of photography today overuses presets and filters, what I was looking for with these is a subtle enhancement, rather than adding what was not there.

Usually I adjust the white balance as I shoot on Canon which tends to make things quite orangey and at the moment the landscape is winter moss and ends up too warm. I remove any dust or rain, adjust the tonal range, maybe reduce the saturation or burn in some highlights and that’s about it!

Sleeklens Through the Woods Workflow

The bundle contains presets and local adjustment brushes (which I haven’t used here, only the global image presets) and are very easy to install and come with instructions and some samples (see below). There’s also a useful series of videos on Youtube. They are stackable, meaning you can apply multiple effects on top of each other – rather than the new effect cancelling out the old. These ones are dedicated landscape filters and focus on warmth and deep blue skies, though they have a whole range for other types of scenes, portraiture and so on.

Using the Sleeklens Through the Woods Adobe Lightroom Presets 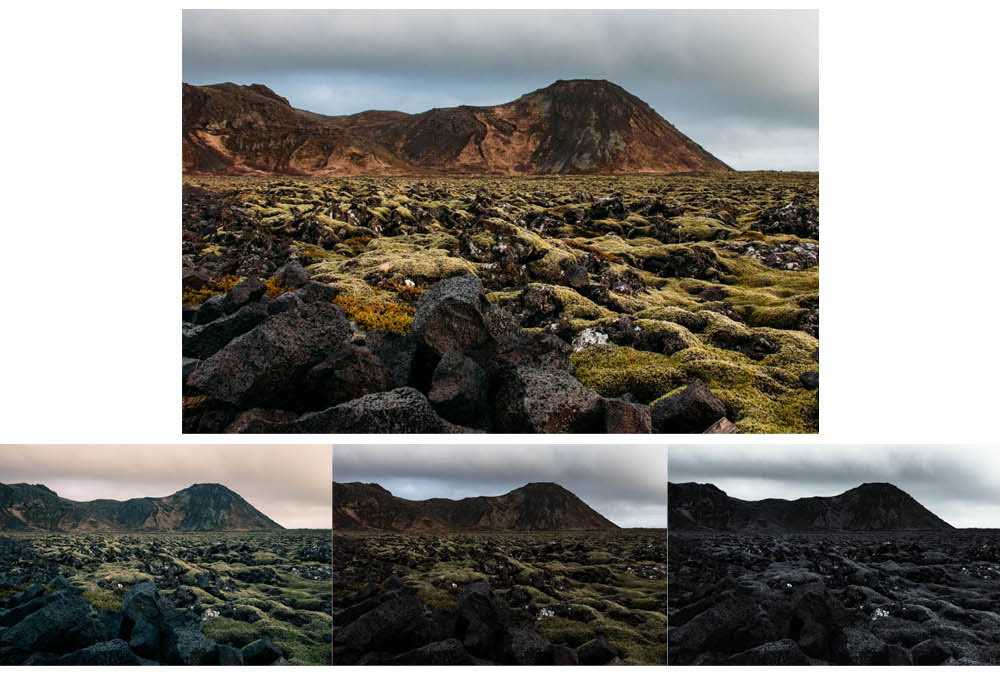 Above is a recent shot I took on a road trip through Grindavik on Iceland’s southwest coast. It was a stormy day with occasional golden light breaking through the clouds.  Taking the same base image I tried some different effects (the original is the top image). These are quite different from what I would normally go for but I like the muted and cool tones, though the sky of the other image is far too warm and would need to be adjusted manually. 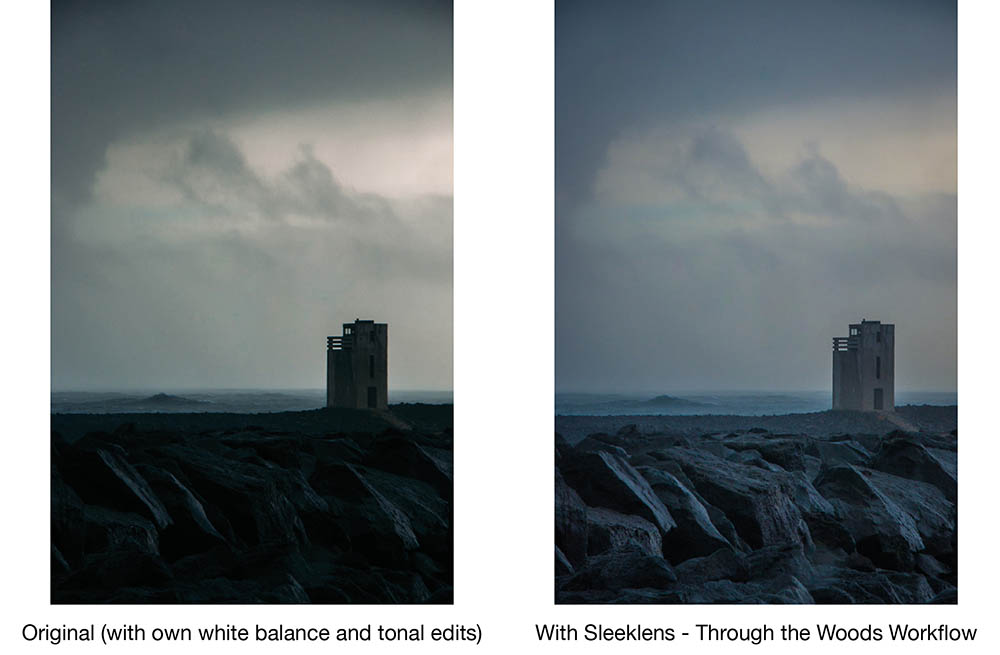 I quite like the moodiness of my own shot here but I like the detail in the rocks of the Sleeklens image, which I achieved by using Clarity and Punch it Up.

Now for something a bit different. Here is Faxifoss in the afternoon just before the sun hides behind a mountain. I really like the rich blacks in the presets and the final result which was achieved quite simply.

I was quite happy with the original image here (a bit less happy when my friend exclaimed “Sibéal, it’s beautiful! Where did you buy it?!”) but the warmth the preset applied is quite nice though it seems to be taken much later in the day. Of the few other possibilities the first is a bit over-saturated I feel, I like the pastels and subtlety of the middle one and the last is quite interesting also.

The clue is in the name Through the Woods, so as you’d expect it’s not the best choice for aurora or northern lights shots, likewise in portraiture (which I tried for fun) it makes the skin tones too warm for an Inuit subject. But that’s not the fault of the presets – they aren’t designed for these scenes, there are others in their collections which are better suited for these.

A ‘grand soft day’ shot from Glendalough in Co Wicklow, the shot on the left is entirely unprocessed and the Sleeklens presets adds a lot of depth which was lacking in the grey day. I did have to dial back the blacks here. The sky remains burnt out as adding a graduated filter over the image results in a weird deep purple which looked totally unnatural.

This is where Through the Woods probably performs best. The above is an unprocessed hazy shot of the Cliffs of Moher in August a few years ago. Nothing special but the below presets made it look like a beautiful summer’s day.

Heading north for the next few shots Upernavik at midnight in July and totally unprocessed. Some of the presets made this very flat and orange so I decided to go the other way for a more old-fashioned summer postcard look. I had to pull the saturation and blacks back significantly as it was overdone and Martin Parr-esque but the final effect is not bad, if very saturated.

And now for something completely different. How does presets designed for sunsets and woods cope with icebergs? I tried a few images here with a more traditional look but really you can do that quite easily yourself as it was only minor adjustments. Instead I went for a dreamy effect with the image above with the following:

The hedgehog-berg is much more defined in the processed version and a look which is quite popular on Instagram at the moment. Achieved using:

I think in general presets should not be applied indiscriminately and you will probably need to make some tweaks; and this is where the local adjustment brushes can be useful;  however they are useful for the a Lightroom newbie to see how images can be altered. There is the big debate about there being too much processing, whether you should post-process at all, what is real and what isn’t. I’m a bit on the traditional fence in what I want to show myself, that is, the scene as I saw it.

With that said I do like some of the effects here. They don’t all suit my images or conditions but I’m a fan of the clarity and subtle vignette for sure – though the clarity might be too much for stock library submissions. And as an aesthetic I really like the subtler, desaturated moody shots, which are almost synonymous with Iceland and Instagram now. I’d like it also for personal shots for my own collection. And I do like the black and white effects. But as can be seen in the Cliffs of Moher shot they can really transform a dull-lit scene, whether that’s what you want is up to you.

Sleeklens Through the Woods Collection available here for $39 (2017 price). Check out their other products and Youtube tutorials.

Do you use presets and what are your favourites? Or do you avoid using them completely?