Can I take a look at your map?

Do you mind if I take a photo of it?

(A route indicated as challenging on my map.)

This is not a place you want to go hiking without a map.

So went the conversation I had with three American tourists on the boat over to Veiðileysufjörður, for some solo hiking in Hornstrandir, Westfjords. I had two maps, a compass, survival bag, a personal emergency beacon which 112 insisted I take as phones don’t usually work, a battery pack for my phone just it did (the first night the cold zapped it to nothing from a full charge despite it being on airplane mode and no apps open), multiple weather reports, left plans with 112 and my Dad. And I was worried about carrying my 15kg pack on my own over the next three days. But there was a half-decent weather window until the weekend brought rain. Cearbhall was coming early the following week and the boats stop running in September so it was now it never. In disbelief I disembarked at Steinólfssaðir, a ruined Hornstrandir farm, and set up camp as it was after six, the route ahead was a minimum of four hours and the pass had fog. Alone in the world, it was the most beautiful evening and I even went for a swim in the chilly clear waters. The nights are getting colder though and even though my kit is designed for colder weather I still felt the dampness and cold during the night.

The next morning my get up early plans were hampered by low lying fog over the mountains. The glacial mountains here hug the cloud-like teenage lovers. And I had to go through a narrow and steep mountain pass. And it’s just as well I did. This 4 hour, 10.5km hike took almost twice this. Not least because that foggy pass was a kilometer of loose boulders on either side with an extremely steep gradient. It took almost as long to get down again as it did going up because every step had to be chosen carefully. Rather than a path to follow, there was a possibility of a way down. Extreme care and caution is advisable.

The fog lifts and descends extremely quickly, depending on the sun, which disappears and returns behind the mountains. The route on the map was just a route and only one part coming down, and then finally coming up to the shore could I find a path. And sometimes I thought it just might have been erosion that someone decided to follow. Marshland and soft moss that’s like walking in sand made up the rest of the trail, though the hike down the valley was beautiful. I had a refreshing swim on the deserted beach filled with driftwood to soothe the poor knee I walloped on a rock, before devouring the cheese roll I’d been thinking about all day. Studying my route for the next day to Hesteyri I was worried as it was much longer, though seemingly not as steep. Plus it’s on the northwest side so would the fog stay long?

I was curled up in bed by 7pm when six Americans came to disturb the peace. Which to be fair they apologised for. Then four French guys who didn’t. So it’s just as well I got my skinny dipping out of the way early. A little while later an Arctic fox appeared showing no fear at all, attracted by the smell of the Americans cooking. I woke up at about 2am to see a faint trace of aurora in the sky. I called the Americans but the French were unrousable.  My tent was home to at least seven spiders and a few more that I squashed during the night. Now I’ve nothing against spiders, not even in my tent. But they didn’t so much as ask if I minded which I found to be a bit cheeky. 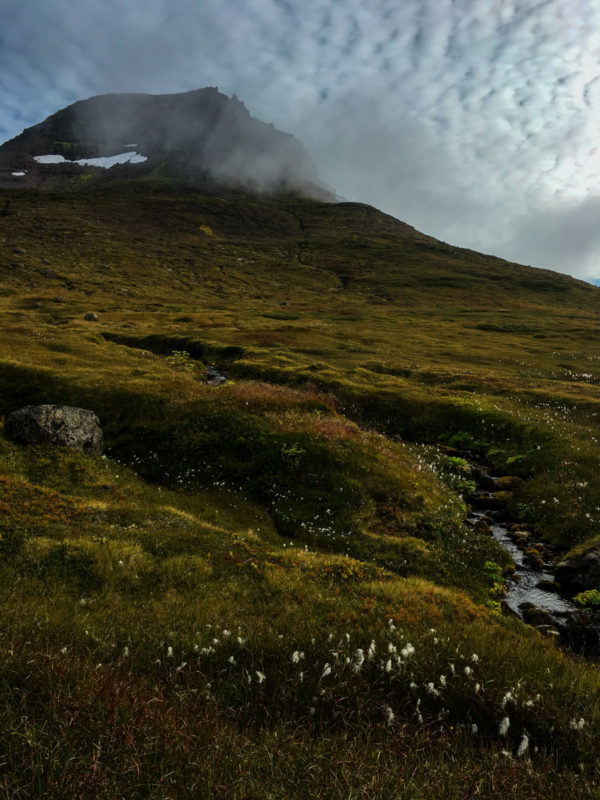 I woke up early enough and with the weather looking clear decided to get going as soon as I could. I said goodbye to the Americans, the French were just getting up and headed along the beach, picking up random bones as I went. The Americans told me that this route would be fairly easy as apart from the steep ascent along flat stepped ridges it was all downhill from there on and there was a path and cairns the whole way. Well, they weren’t technically lying but I cursed them all the same when I couldn’t find the path leading inland and had to go cross country. Eventually, I met up with the path as it followed a river and waterfalls up to the pass. It’s a high enough ascent when you’re carrying 15kg though and this is where my lack of training is showing. The barren top descends quickly and over very rough ground before you follow a plateau of stones, rocks, marsh, loose gravel – a bit of everything really. There were quite a few cairns alright but the path would peter out, or go into a rocky patch and it could be hard to find it again. So mentally this is quite demanding, navigating while also trying to see where your feet are going and not twist an ankle.

I managed to check in with 112 and my dad from the summit. He said to take it handy. I was taking it fierce handy and not just to prevent injury. The French were long ahead of me at this stage and I was also passed by the French guy who was on his own on the boat. Ambling along at a fierce speed. Backpack straps open and wearing one headphone in very nonchalant manner. I can only presume there were both goats and Icelandic horses somewhere back in the family tree. The last few kilometers were tough and seemed to drag on forever. My shoulders burned from the weight of my bag. I was now wondering if I should have bothered with my camera. I was too tired to keep taking off my bag to get it out of the top and easiest to access pocket. My hips were bruised from the hip straps. The pack felt like it was ripping muscle off my ribs. My whole body ached. I was cursing the fact that I hadn’t just gotten the boat to Hesteyri that day and done a one day hike to Aðalvík instead. Whoever writes the descriptions on maps should leave out ‘challenging’ or ‘interesting’ and instead consider ‘I’m breathing through my arse here but the view is lovely’, ‘why was I so stupid to think this was a good idea’, ‘dear Jesus, kill me now’ or ‘maybe I am dead and I’m just too tired to notice’.

Eventually, I got to the village and dropping my bag at the cafe decided to see if it was open because I couldn’t face the half kilometer to the camping ground. Asking if they were open for food, a German replied ‘yes, why not?!’ And I sat down to the best spaghetti I had in my life. The French were there waiting for their boat. A man I had been asking about the camping grounds turned out to be Hrólfur, the owner of the beautifully restored Old Doctor’s House cafe/guesthouse. Originally a music teacher who studied in Germany, and where he said he imported the cook, whose name I never got but whose cooking skills beat any five-star restaurant. We chatted for a while about this and that and Hrólfur said he was curious how I ended up in Iceland. He also invited me to the Hesteyri Bío in the old schoolhouse where he was showing a horror film set and filmed in Hesteyri. Sleeping bag accommodation in the guesthouse including breakfast and dinner is about 16,000kr. And I was so tempted to stay the only reason I didn’t was because I couldn’t say I camped the whole way. After setting up next to the French gazelle (turns out the Americans tried to keep up with him after the set off immediately after the boat landed. They lasted 15mins but seemed to make it to Hornvík the next day. I hope they learned their lesson. But probably not.) I took a walk around the graveyard, met another fox and had a swim before heading over to the old schoolhouse for the film: Ég Man Þig, about a child trapped between two worlds. There were a half dozen Icelanders all from around the Westfjords/Ísafjörður area (though most were now in Reykjavík) who came over by boat just to see the movie and were heading back the same night. With popcorn and coke, we settled in, and honestly, it was a fantastic way to spend a Friday night up here. Not giving away the plot all I will say is that it’s incredibly creepy and brilliant. And she didn’t go far enough to get phone reception. I know.

Looking back on it from the warmth of my sleeping bag I had expected this to be worse weather-wise. I set off at 9am following the telegraph poles west through a bog. This was my first mistake. It’s probably easier to stay on the beach and just follow the direction instead as I was soaked from the bog and the overgrown grass by the time I hit the path. Ascent wise this route is easy, especially compared to the previous days which was good because I was þreytt as hell at this point. Screw you bag. The ground is tough going even with the path. Lots of loose stones and you have to pick your step. But I made much better time than before and only in a few places where the track disappeared as it was so wet or taking my time on the descents did I feel I lost time.

But being tired I had a few whoopsydaiseys so be careful. It was drizzling to rain most of the day but the wind was to my back. The only thing is because of the rain and the pain of taking off and putting on my pack again I didn’t use my Canon camera much at all, just the iPhone in my pocket (my hands being occupied with hiking poles which saved my unfit tires arse so often). But on a nice day with less weight this would make a beautiful walk. Plus the blueberries were ripe and delicious to snack on going down the valley. Descending down to Sæból I was never so happy to see a place and after putting up the tent, having my breakfast and lunch together in my sleeping bag, trying to warm up as all my walking clothes and boots were sodden from the rain, grass and bogs, I fell asleep by 6pm as the wind (8m/sec) shook and the rain pounded the tent, thinking of the pool which would be my first stop back in town the next day.

In the morning I went for a swim with the seals before strolling around the village while waiting for the boat to come. Early as it turns out, I was the only pickup of the day. As they were turning around as I waved frantically. I only had one skyr and half a bag of muesli left to eat.

[…] watched the film of this while I was camping at Hesteyri, in the Westfjords where this is set. Camping in the graveyard, which features prominently. And the bit where they […]