Books to read while travelling in Scotland, Norway, Iceland and Ireland 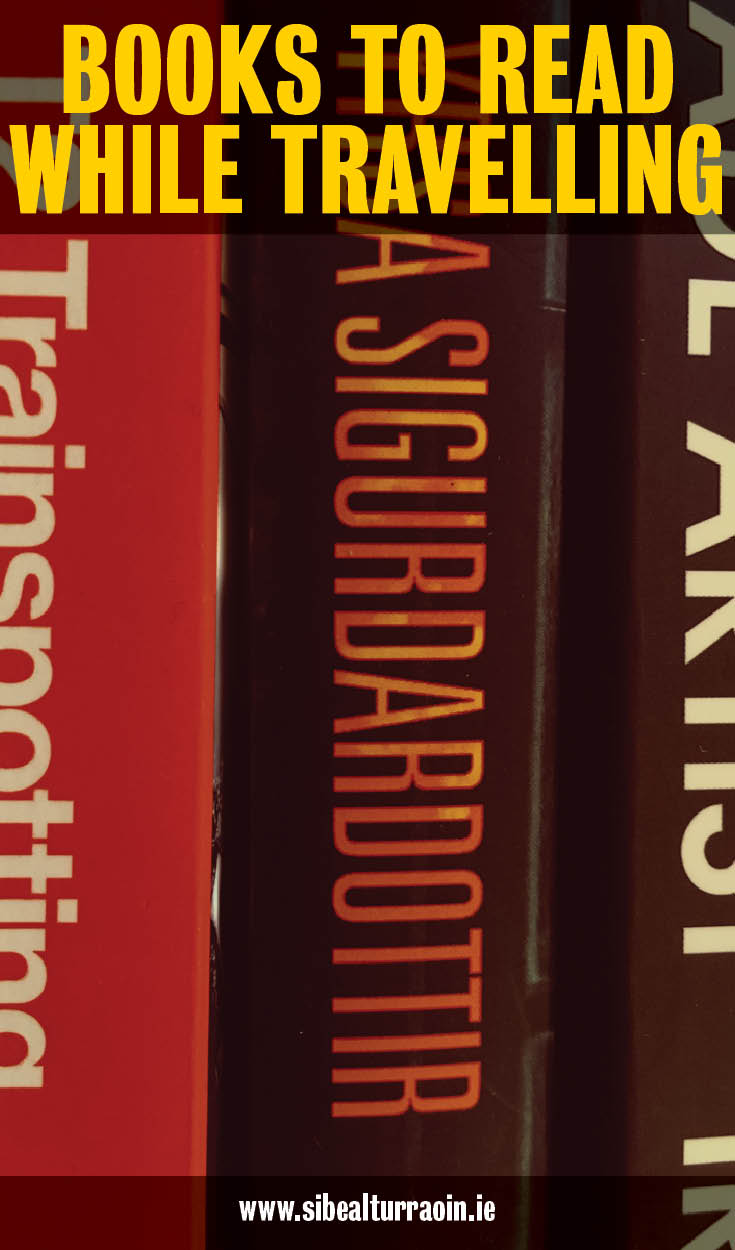 Sometimes people joke that I travel just so I can read in peace and quiet. In fact, when we set off on the Northwest Passage I packed over thirty books. It’s not completely true but I can’t set off without books to read and I especially love reading something set in the country I’m visiting. It’s also the middle of Jólabókaflóðið, or the Icelandic book flood, where most of the books are published before Christmas. With all that in mind, here is part one in this series of some of my favourite books, while travelling to let’s say, colder and rainy countries.

Books to read in… Scotland

Currently airing as a TV series, the Outlander series follows Claire who travels back to Jacobite Scotland through a mysterious stone circle.

I loved this book as a child and I’ve re-read it several times. David Balfour tries to find his way in 18th century Scotland with several characters such as Alan Breck Stewart and his silver buttons based on real-life people. There’s also a sequel Caitriona and as a bonus I Robert Lewis Stevenson’s great-great-great niece is a friend of mine.

You just can’t travel through Scotland without thinking of Harry Potter and if you visit Edinburgh be sure and stop at The Elephant House café where she wrote the first book.

Books to read in… Norway

Harry Hole, pronounced HO-leh as you find out towards the end of the series, is an alcoholic, scarred, somewhat mentally troubled and utterly hilarious detective working in Oslo and star of this gripping series of dark thrillers.

Books to read in… Iceland

I watched the film of this while I was camping at Hesteyri, in the Westfjords where this is set. Camping in the graveyard, which features prominently. And the bit where they climb the mountain to make a phone call – you need to go higher. I’m currently reading the book and it’s just as gripping. Yrsa is also the author of the Þóra Guðmundsdóttir Crime Series some of which I love (like Last Rituals) and some I didn’t get into as much.

Another fantastic grumpy alcoholic cop series, this or any of the Reykjavik Murder Mysteries featuring Detective Erlendur are excellent.

Iceland’s only recipient of the Nobel Prize for Literature is still an esteemed figure in Iceland and this novel follows Guðbjartur Jónsson and his quest for independence where life has barely altered for a millennium.

Books to read in… Ireland

The legends of the Fianna, Fionn Mac Cumhaill, and others

Standing on the Giant’s Causeway, looking north to Scotland, and remembering the tales of Fionn Mac Cumhaill and his fight with the Scottish giant Benandonner brings home how important my culture is to me.

Any poetry by Seamus Heaney, Patrick Kavanagh, and WB Yeats

All of Ireland’s best-loved poets, or at least the most famous, I strategically focused on Yeats when studying for my final English exam at school, and I can still remember September 1913 by heart.

What need you, being come to sense,
But fumble in a greasy till
And add the halfpence to the pence
And prayer to shivering prayer, until
You have dried the marrow from the bone;
For men were born to pray and save:
Romantic Ireland’s dead and gone,
It’s with O’Leary in the grave.

Also famous for Dubliners and A Portrait of the Artist as a Young Man, I actually never liked Ulysses (the best thing about it was, as I read it on a trip to Croatia – I found a statue of Joyce outside his former school) but a friend of mine loves it so much he starts it again as soon as he finishes it. And if you do like the novel be sure and visit Dublin during the Bloomsday celebrations where you can visit the house in which the Dead was set and watch Dubliners dress up in Edwardian garb to reenact parts from the book.

GK Chesterton once described the Irish as “the great Gaels of Ireland, the men that God made mad, for all their wars are merry, and all their songs are sad”. Sive is a hilarious if a completely tragic story of a young girl forced to marry a much older man, and my grandmother and I used to quote this to each other, Keane also being from her native Kerry.

The Importance of Being Earnest – Oscar Wilde

Or The Picture of Dorian Gray or basically anything by this celebrated wit.

I can’t explain the plot of this bizzare, confusing and utterly brilliant novel without giving away the ending. But if you read one thing from this list, let it be this.

An Anglo-Irish satirist, Swift was also the Dean of St Patrick’s Cathedral, where I had my graduation ceremony and around the corner from the fascinating 300-year old Marsh’s Library, with whom Swift had something of a feud with, and also where Stoker would write and research.

Set in Transylvania and London, Stroke drew intensively on old Irish tales of corporeal ghosts, vicious slaughter and blood lusts as well as stories from his mother where famine victims drank blood and ate the flesh of the dead in the Sligo of her youth.

A seriously disturbing, if wildly-acclaimed, view of a young boy in mid 20th century Ireland.

Stroll amongst the crumbling Georgian mansions of north Dublin and try to imagine the squalor, filth, and chaos of Plunkett’s Strumpet City.

The Lion, the Witch, and the Wardrobe – CS Lewis

A much-loved children’s series, it’s perhaps less well known that Lewis was born in Belfast and his writing was influenced by Celtic and Irish myths as well as the Norse Sagas.

I was lucky enough to see this performed in London with Ian McKellen in one of the lead roles. Basically, two men waiting for a man named Godot, its rambling and beautiful dialogue is a gem of Irish writing. There was also a play inspired by this called Waiting for Ikea featuring a pair of pajama-wearing howyas.

The Dublin Plays (Juno and the Paycock, Shadow of a Gunman and The Plough and the Stars) – Seán O’Casey

O´Casey’s Dublin plays are set at a time of dramatic upheaval and change in early 20th century Dublin and I studied Juno and the Paycock, about Juno and her peacock of a husband Captain Boyle at school. The dark humour covers serious and tragic themes of political change, rebellion, death and hope – and if you get the opportunity to see one of these brought alive at the Abbey Theatre so much the better.