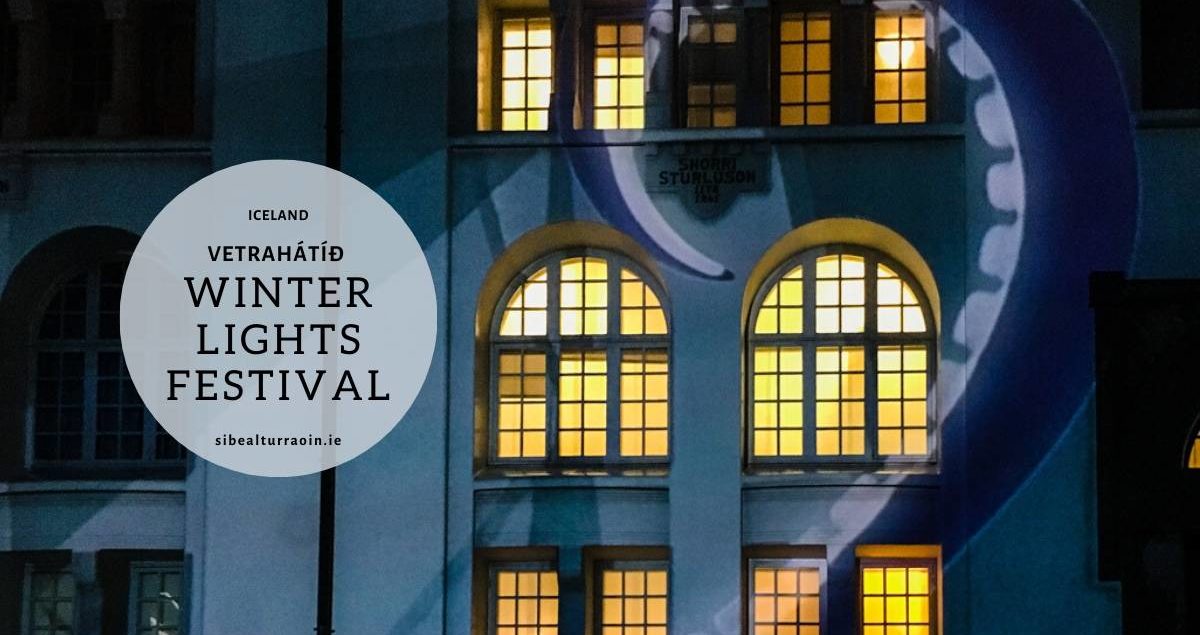 culture, Iceland, Reykjavik, things to do

The Winter Lights festival, or Vetrarhátíð, brightens up a dreary and cold February in Iceland. Celebrating the lengthening days, the festival is a combination of cultural events, light installations and many museums are free which is a great bonus. Many museums put on special guided tours or events, there’s art everywhere, language classes, storytelling, there was a cycle race up Skólavörðustígur, last year a huge erupting volcano was projected onto Hallgrímskirkja and the town is full of people, especially families walking around with a really nice vibe. The only problem is deciding where to go. So having a free Friday night I dragged the boy into town for a culture overload.

The first stop was Safnahúsið (the Culture House), which is part of the National Museum. I have to say it wasn’t best museum I’ve been to here. There’s a rather random collection of folk artefacts including a photograph surrounded by what looks like flowers made from human hair, some letters, eye-bending modern art – some of which I did like; and a group of teenage girls dancing around in their nightdresses, presumably something which only happens during Vetrarhátíð. What is interesting is some sketches of the city crests and coin designs, but on the whole, I wouldn’t make this one a priority. Still, it was free, I would have felt more let down if I had paid. The building itself is beautiful. Designed by Danish architect Johannes Magdahl Nielsen, it was originally the National Library. We left just as a light installation was starting outside which honestly was far more interesting.

The nearby Pönksafn Íslands, the Punk Museum, is always worth a visit and though I’ve been before it’s always interesting, plus it’s set in an old underground toilet and I needed to pee (there’s no lock – get someone to hold the door). Although sadly Barbie has been moved it’s always fun to dress up like a punk and play with the drums. The only downside was that as it was Vetrarhátíð it was jammers, and it’s not a big museum to begin with. The last time it was just me and Svarti Álfur, one of the founders.

The whale museum (is it a museum or an exhibition? – I’ve no idea) is a bit out of the way down in Grandi but is a lot of fun. Twenty-three life-size soft models of whales hand from the ceiling which you can touch. There’s an app you can download to learn more, a virtual-reality headset you can don to imagine you are in the ocean and some information about all the species, more than I had imagined lived in these waters. None of which we bothered with, instead I honked each and every whale nose. An interactive touch screen tells you more about the physiology of the whales in both English and Icelandic, so I did learn something while I played like a big kid (unfortunately the climbing frame and toys were taken over by small people) and you can feel real baleen. It would have been nice if they had more than just one skeleton but overall it was a lot of fun. Overall it’s a good rainy day activity for families, taking maybe half an hour to move through the exhibits or 45mins for a guided tour, though the entrance is expensive at 5800ISK for 2 adults and 2 children.

All in all, it was a fun evening, free – which is unusual for indoor activities in Iceland, so really can’t complain at all!