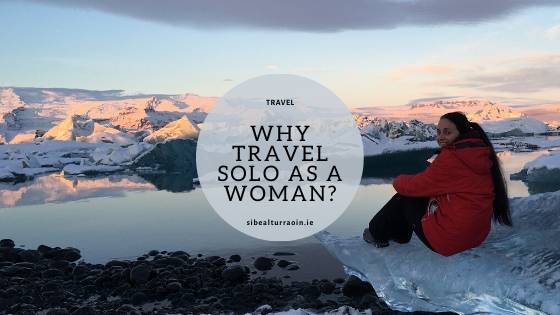 Can I travel alone as a woman? I was asked not so long ago about my experiences of travelling solo as a female. Why did I do it? What did I worry about? What made me think I could do it? To be honest, it never occurred to me that I wasn’t able to travel alone as a woman. Think about it. Outside of destinations like Afghanistan or Syria – they are justified concerns – have you ever heard a guy being told: “Are you sure you’ll be able to go there?” But say backpacking around Europe, or going on a hiking trip. You will hear similar utterances to women. Why? Before you think this is another example of the patriarchy, most of the negativity I’ve received in my life about these kinds of choices have been from women.

When I was going to sail through the Northwest PassageThe Northwest Passage, my boyfriend at the time told people where I was going, what I was doing and so on. All the guys, bar one, asked: “Why?” Admittedly it’s a reasonable question. Why would you want to be suck on a boat, in bad weather, lots of ice, in the cold, for six months? You must be mad. Maybe I am. But what annoyed me was, that one guy and all the women asked: “And you’re letting her?” I never asked him permission to go travelling or for anything else. And neither did he for that matter.

It has never occurred to me to be unable to do something because of my sex. Or that I shouldn’t do it.

Last summer on a bus in Snæfellsnes I overheard two American women discussing a fellow traveller they met. They cut strips off her, as we say in Ireland, for being so irresponsible to travel around Iceland solo while pregnant. It never occurred to me to not be able to travel alone as a woman because I was never told I couldn’t. When I was a kid I hiked with my family. I had a workbench in my grandfather’s studio and my own carpentry set. I was given the tiller on the boat when I couldn’t even see over the bow and given a course to steer. My grandmother told me to go everywhere and see everything. When I did physical training (for a career I didn’t get due to an old injury but not because of my ability) I was never told: “You did enough for a girl”.

There have been a few times when I’ve gotten hassle, for example in Morocco or Cuba I’ve been catcalled. Or ignored when I was with a man. Which was fine because when I was ignored I also didn’t have to deal with the hassle of being offered cigars, carpets, argan oil or whatever anymore. It also meant my then-boyfriend had to keep turning around to me because I had made most of the arrangements. The irony.

In light of the #metoo campaign, some might say that this is sexual harassment and I’ve been signalled out for being a woman. Maybe, but I’d also be signalled for being foreign. And to be fair most of those experiences have been with people who go for tourists. What’s more, I’ve had people go out of their way to help me more times than people haven’t. Those offers of a camel bride-price have led to great conversations. I’ve been invited into people’s homes. To dinner. Being led to where I want to go to make sure I get there ok. Given gifts. Maybe in me someone sees their daughter, or sister, or wife, and would hope they would be treated the same in another country. And these are the upsides of travelling alone as a woman.

Once in Western Sahara, I sent the following text: “Don’t freak out but the guy who was showing me around the desert ran out of petrol. We’ve stopped at an army camp next to a village to borrow some. It’s very poor. I’ve been locked into the car for my own safety. These are the coordinates and the reg plate. If I don’t text you in an hour get worried.”

It all turned out fine in the end.

I sometimes feel unsafe because I’m about the size of Thumbelina and it’s hard to defend yourself against anyone twice your size. So I must switch myself on and use my common sense. I’m conscious that if I’m hiking on my own I need to take my abilities into account, leave travel plans, have a backup plan and so on. But none of that is to do with my being a woman. I might have to work harder than a guy, I might get pestered more in some countries because I’m not a guy. But the fact that I’m a woman is not going to stop me from doing something. In fact, it’s not even in the equation.

I don’t carry pepper spray. I often have a knife, mostly for the usual knife-related necessities, rather than defence. If I think I’m being followed I stick to brightly lit streets. I wait for a while somewhere public. I lock my room. I hide my cash. I have duplicates of all my documents. If I’m feeling very wary I put my keys between my fingers. I text registration plate numbers and when I’m expected to check-in. I’ve not been killed more times than I thought I might be. Because let’s face it, you usually expect the worse. And it’s often not the case.

I come from a very privileged position. I’m Western. White. I’m not rich but I’m comfortable enough to know how wealthy I am in comparison to a lot of the world’s population. I have a very different life to say a female from a lower caste background in India. Or a woman from the Congo. Or a woman in Afghanistan. I am not trying to speak for those women. Only for myself. And I don’t need anyone else to speak for me. Their lives are a lot harder than mine. But I would say to any woman who thinks they can’t travel on their own as a woman, the only person holding you back is you. You have to be a bit self-sufficient as a solo traveller. You have to make an effort to make friends. Use your common sense and don’t get into a situation you can’t get out of. Have some personal responsibility. And remember, not everyone is out to get you. Being a woman is not a handicap, it’s just part of who you are.