After leaving Ka at the airport (and conveniently collecting two friends who arrived just as he was leaving) I headed north again. It was a bit late in the day to go right into the Westfjords so I decided to find a place to camp near Eiríksstaðir, the site of Eiríkur Rauður’s farm and birthplace of Leifur or Leif Eiriksson. After driving up and down a washboard gravel road trying to find the campsite, I finally called and was told it was no longer open. So, after a quick look at the reconstructed farm in the fading light, I headed to Búðardalur and pitched my tent in the dark and lashing rain. What fun! 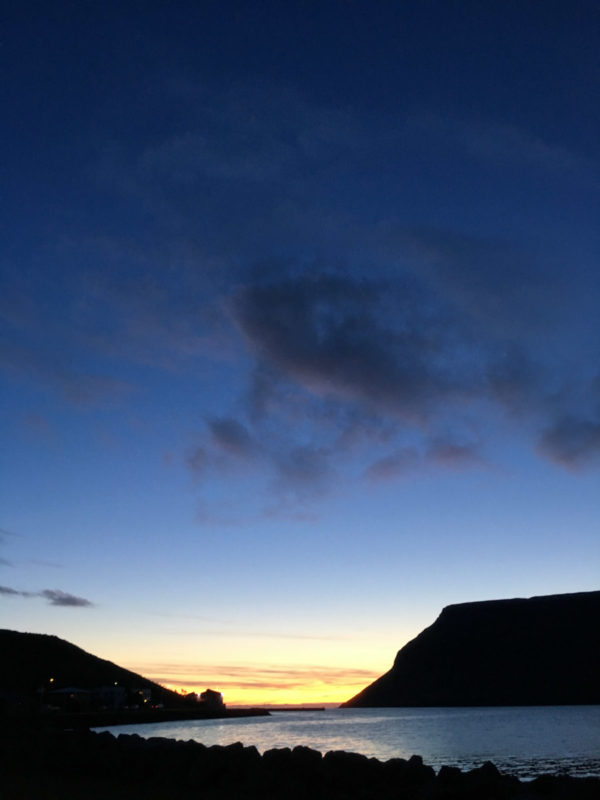 After two weeks of constant hiking and driving, I really needed a day off. Yes I know I’m on holidays but still, when you can’t summon the enthusiasm for the beautiful places you’re in, you need to take some time to get your mojo back. And so, with the weather mostly an overcast, rainy day – with little dramatic light to make it worth taking photos, I headed to Reykhólar to check into the hostel and chill out. And it was worth it. Really clean, comfortable, friendly owners and a hot tub; I spent the day working on photos and sorting out my gear. Unfortunately, the seaweed baths were closed for the winter so I instead stopped off at Hellulaug, a natural pool by Flókalundur, near where Hrafna-Flóki Vilgerðarson, or Raven Floki and the first Norseman to deliberately sail to and overwinter in Iceland. After a harsh winter where he lost all his cattle, he climbed a nearby mountain and saw Ísafjörður full of ice, after christening the island Ísland – meaning Iceland, he packed up and headed home. Sitting in the car after my dip, the tranquil atmosphere somewhat spoiled by a half-dozen Russians taking sixty million selfies, I read that the natural pools in west Iceland have shown record levels of fecal matter and bacteria. Previously so few used them they were practically self-cleaning. Lovely.

The driving in this desolate corner of Iceland, at least during these few stormy autumnal days, is beautiful but hard going. There’s still a lot of unpaved roads, in winter Patreksfjörður and Ísafjörður are cut off unless you drive all the way back to the ‘mainland’, and it’s quite tiring. But it is stunning. Rough and all as the roads are it doesn’t stop two-wheel drive cars trying to overtake on bad bends, stop in the middle of the road (my personal favourite) and, just when I stop at a deserted layby to take photos, have the next four cars stop to see what I’m up to. Sigh. Having pure decision anxiety, I couldn’t choose where to spend the next night and so eventually, on a whim, settled on Breidavík, by Látrabjarg. The wind was a lively 12m/s and the one other tent there when I arrived had taken the sheltered spot by the ruined walls. They also glared daggers at me so I decided to head into the hotel bar. Despite the friendly staff, a half-dead affair where I am sure a murder will happen Cluedo-style.

Delighted to wake up alive the next day I headed up to Látrabjarg. The cliff walk is better than I’d thought (was expecting a narrow path halfway up the cliffs) but it was blustery enough and blowing seaward so I didn’t do the whole route – 8km or 20km depending on if you’ve dropped off another car or not. Instead, I sat and watched the birds swoop and dive and the rocks being pounded by the waves. The ravens are particularly beautiful to watch, their feathered wings curving out into a fan. But numbers have been dwindling rapidly due to hunting. 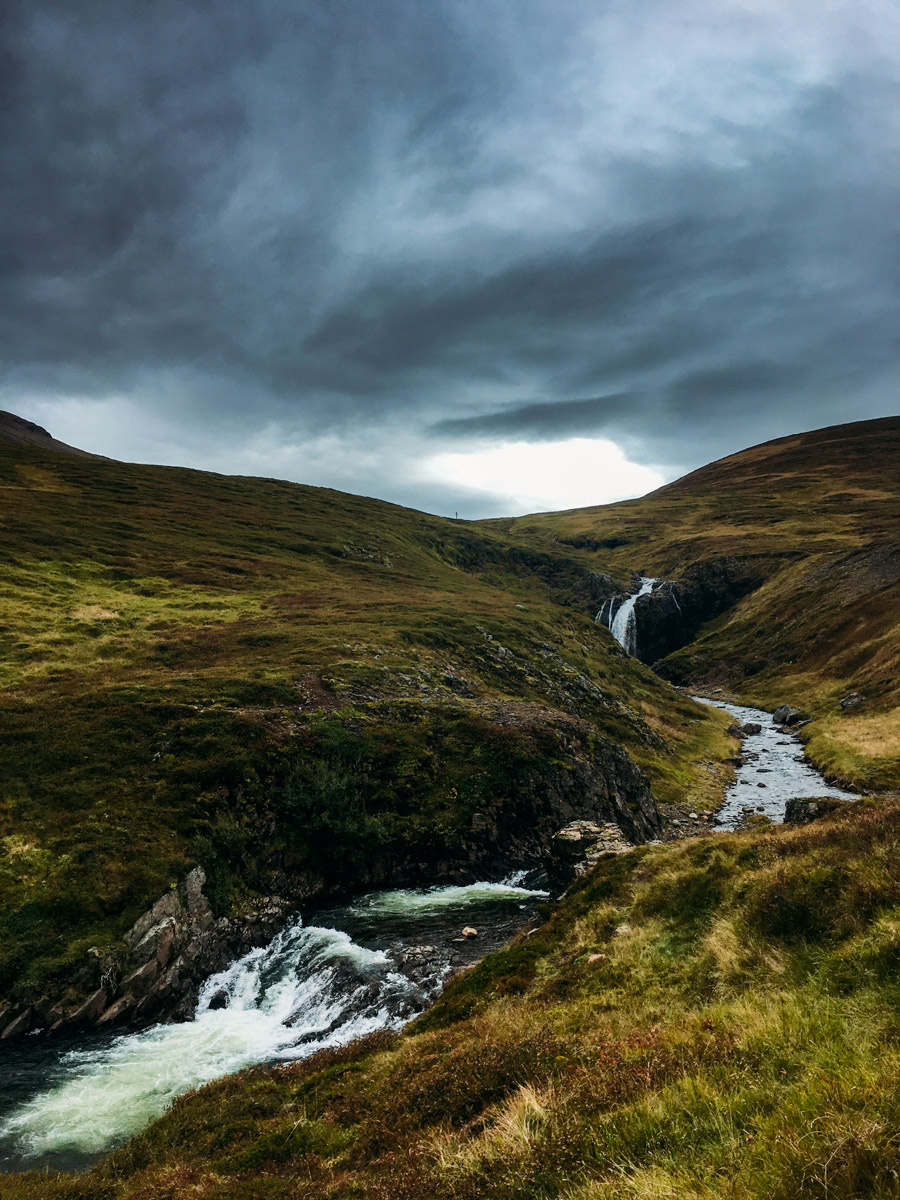 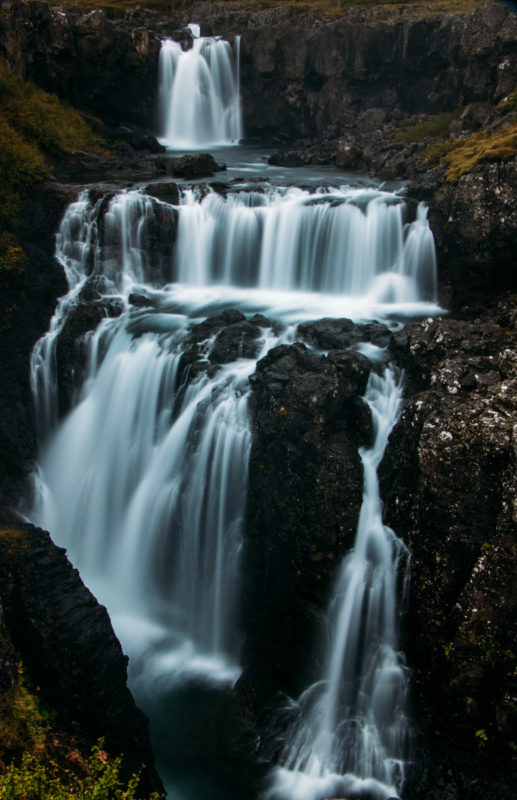 The gravel road along here is difficult, to say the least. In Ireland someone would have put up a home-made sign saying “Road in shite”, but this is Iceland so they presume you know it is. Not quite sure if I had enough petrol to get to Rauðasandur I headed back to Patreksfjörður first to fill up and to see if I could get a mousetrap for the uninvited hitchhiker I had seemingly picked up overnight. “I have a mouse in my car do you have anything to kill it” is not a phrase in my Colloquial Icelandic book and seemingly there are no mice in Patreksfjörður because I couldn’t mind a mousetrap but eventually got poison from a very bemused chemist. It was probably the most interesting thing that happened to him all day. My friend thinks I’m being unfair, I should keep him for the company and rename this blog to Sibéal and Herra Mús in Vestfjörðir. I’m not convinced. He never asked permission and as the chemist said “How rude!”

My messages all done (and all traces of Herra Mús erased), I headed back to Rauðasandur. I had wanted to get a photo of the ship at the foot of the fjord but couldn’t with the huge camper van parked up next to it. The mountain road to Rauðasandur is terrifying. Really. Narrow. Full of craters and along the edge of a cliff the whole way up and down a pretty high mountain. The view is stunning but you can’t look at because you’ll come off the road even if you’re crawling. At this point, I’d like to advise anyone who’s thinking of buying an ex-rental to not. I have to keep my car for the winter. These people are handing theirs back in a few days. As long as there’s no obvious damage it’s fine. Flying along, overtaking on narrow gravel mountain roads, and these are two-wheel drive cars I’m talking about. I couldn’t drive right to the far end as a farmer was doing bales so instead I walked up the other end and along the shore, scaring some very stupid sheep along the way, before heading to the other end to watch the sunset by Látrabjarg.

Knowing it was going to get very windy at about seven the next morning I broke camp early to avoid packing up the tent and driving that road in high winds. I stopped off at the beautiful pool at Patreksfjörður before heading north along the coast. This is easily one of the best road trips I’ve ever done. After the airport, the road becomes a gravel road – not the worst mind – and as such Patreksfjörður and Ísafjörður are cut off from each other at this end in the winter and there is no winter access to Dynjandi. But the scenery is just stunning. I think I repeated that to myself for about twenty minutes at one point. The imaginatively named Foss was my favourite waterfall along this route, though Dynjandi is also gorgeous it was pretty busy. Camping there is for hikers and bikers only. I also stopped at the fun Sea Monster Museum at Bíldudalur. But the mountains stole the show, with the perfect low light, autumn colours setting the hills ablaze, the combination of textures through moss, bracken, stone and water I lamented the lack of stopping places.

Of course between the road and the views, it took me three times as long to get anywhere and it was late when I eventually decided to camp at Suðureyri. The campsite is down near the harbour and perfectly located but thanks to winter opening times, the shop that manages it wasn’t open to take payment until after 2pm the next day and the toilets were locked. What fun. So sorry, I owe you 1200 ISK but since I couldn’t find you to give it to you… I’ll get you next time. Still, the aurora did make a pretty appearance in the skies. Moving faster than I’ve ever seen them they were hard to photograph as you could barely keep up with them. Eventually, I headed to bed, being tired and besides the next day a huge solar storm was going to hit. With that in mind all I did the next day, besides heading to the pool and checking my tyres after the gravel roads, was noting locations for northern light photography. A safe place to park, with a nice view, away from lights. Not much to ask right?

Sibealreply
– In reply to: Stella Terry